HONORING TOMMY REVISITED – FOR THOSE WHO VOTED, THANK YOU 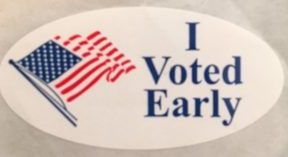 More than 126 million people cast votes in the Presidential election. Each and every one of you honored those who paid the ultimate sacrifice to protect our right to vote and choose our leaders.

Just as I told you in my pre-election post, I was there to observe and protect the integrity of the voting process. I am happy to report that this election, for all the rancor of the campaign that lead up to the election, was one with very few election day issues. The election officials did their jobs with honesty and integrity – without partisanship. Something every one of us should be proud of in every way.

We learned from this election, if we did not know it before, that every vote counts and is important. You see, the Presidential election was decided by less than 65,000 total votes cast in Florida, Wisconsin and Michigan. Don’t ever let anyone tell you that your vote did not matter. It did as it always has.

Election day was not without some concerns. Voting machines broke down. While that did not impact the outcome of the election in any way, machine breakdowns cast doubt upon the election process.

I know, I received calls and reports from individuals of all political positions. Every one of them who had to leave a polling station with a ballot filled out and placed in an envelope to be added to a machine after they left was worried their vote would not be counted.

We cannot afford to have that type of concern in our election process.

I saw people cry when they were turned away from the polls. Four people this year. Every one of them was more than 85 years old. Every one of them had voted in every election in the same polling place since the 1950’s. Every one was turned away because they did not have the required photo ID. It was amazingly hard to hear their stories. To explain to them that even that day they could go to the DMV and obtain what they needed to vote.

One man explained to me that it took him one hour to get his 88 year old wife ready to vote. They did not drive any more. They would have to ask for a ride to the DMV, wait there, return to the polls. Something that they simply did not have the strength to do even if there was someone to volunteer to drive them to the DMV and back to vote. They cried. Why would anyone stop them from voting like they had for more than sixty years.

Surely concerns about voter fraud and efforts undertaken to prevent it did not mean to cause such pain in those who have faithfully cast their votes for more years than most of the people in office or voting have even lived. We must find a way to accommodate individuals like each of these elderly citizens. The four people that I talked to lived in different areas, two in an affluent suburb, one in a middle-class neighborhood in a city, and one in a poor neighborhood in the city. Every elderly voter was effected in ways that you or I were not. Integrity and what is right calls for us to honor these Americans and make sure they can vote.

Most importantly, the time has come for our country to heal. For our political leaders to talk with one another and listen to one another to provide a government that serves those who elect it. As citizens we must also, each in our own way, find a way to heal the divides to come together and move this country forward. We owe that to our veterans. We owe it to the generations that voted before us that have moved forward in spite of differences in the most difficult of times. We owe it to our children and grandchildren.

I have never had a problem talking with anyone of any political persuasion one-on-one. We always found issues upon which we agreed and ways to move forward on those that we disagree. It is time for our country and our leaders to do the same.