TO HONOR TOMMY – VOTE, BECAUSE HE SACRIFICED ALL … 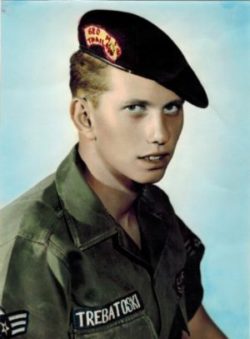 Illinois Avenue in Stevens Point, Wisconsin. No houses there anymore. It’s the road next to the St. Michael’s Hospital’s parking lot.

Not so when I was a kid. It was a road where every person on the block was my relative. Yes, there were Trebatoski’s in every single house on the block. No need to refer to anyone by last name. So, down the street from Grandma and Grandpa Frank’s house lived Tommy – Thomas Harry Trebatoski.

He looked so much like my father that they could have been brothers.

He paid the ultimate sacrifice protecting freedom in Vietnam. He died in 1966, just 21 years old. His name is on the Vietnam Veterans Memorial on the mall in Washington, D.C. That memorial is known as “The Wall.”

I visited The Wall in the fall of 1999. The Wall is a powerful and spiritual place.

I knew where Tommy’s name would be. Panel 11E Row 44. But there were so many names.

I found it. And when I did, I reached out to touch The Wall. To touch Tommy’s name. When I did I remembered the time when I was child and Tommy made a basketball shot. Swish! But then the reality of why The Wall was there and what it meant to be listed on The Wall struck me to the bone.

Ever since that day, every four years when it is time to elect a new president. I take the day off of work. I do not bill a single hour. I do not answer a single client call. Instead, I honor Tommy in the best way that I know how.

I volunteer to observe at the polls. As a lawyer I can serve my country by ensuring that everyone – no matter what candidate or party they vote for – no matter whether they are liberal, conservative or something in between has a chance to vote.

It is not a sacrifice to observe at the polls. It is an honor. It is humbling. It is part of who I am after visiting The Wall.

Election day is long. It starts before the sun rises and ends only hours before the next president speaks on election night.

The laws that regulate voting are complex – maybe too complex. Poll workers care deeply about the job they do but, for the most part, they are not lawyers. They cannot possibly understand or explain to voters all of the varying regulations.

All that you have to see – just one time – is a voter who comes to the polls to vote and is turned away by a poll worker. They are powerless. They cry. They do not understand why they are being turned away.

It is the closest thing I have ever seen to those standing with their hands on The Wall.

The first time I saw that happen was to a woman had just retired and sold her home. She moved less than ten days prior to the election to her downsized apartment from the home where she and her deceased husband had raised their children.

She was turned away because she had not lived in her new home the ten days required by federal law to vote in the new location. The poll worker was correct to tell her she could not vote there. She started to cry. How could this be?

What the poll worker forgot to tell her is that she could still vote where she had for most of the last 40 years – at the polling place assigned to the house she just sold.

I overheard the conversation. Walked toward the woman as she left the polling place. I knew she could vote and where. I said to her ma’am I think I can help you. She looked at me not really knowing what I was going to say. She saw my “Observer” name tag. Who is this man in a suit, she must have thought.

I told her how she could vote – at her old polling place. Her tears stopped. She hugged me.

The chief election official heard the conversation and when the line of voters was gone thanked me for talking to the woman and reminded each of the poll workers so the event would not occur again.

Later in the afternoon, the woman returned to the polling place with brownies for all of the poll workers. She smiled from ear-to-ear. She had voted. She somehow knew how much pressure was on the poll workers and she did not want them to feel bad but to rejoice with her because she had voted.

I will never forget that moment. That is what Tommy fought and died to protect.

I’ll be there on November 8 this year. I’ll be honoring Tommy’s memory. I’ll be helping to protect the rights of all voters by sharing my knowledge as a lawyer.

I ask each of you to do only one thing on November 8. Vote. For the candidates you choose. I’ll be there and so will other lawyers to make sure your vote, no matter who you vote for, counts.

Vote as if your life depended on it – Afterall, Tommy’s did.