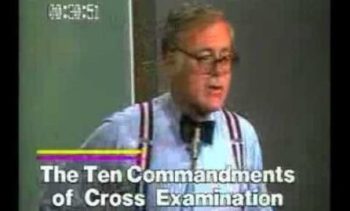 The most often stated phrase related to trials used by both lawyers and non-lawyers is that the most important rule of cross examination is never ask a question for which you do not know the answer.

Indeed, some people have elevated that mythical statement to the status of a commandment of cross-examination.

Nonlawyers have an excuse for repeating the myth – they have heard it mistakenly said too many times.

Lawyers do not have any excuse for perpetuating the myth. If your lawyer says that – change lawyers.

The reason – the statement is flatly wrong.

To illustrate the point, the extensive use of depositions and the breadth of the process of discovery that exists in most courts in the United States is a relatively recent phenomenon. For years lawyers tried cases with little discovery from their opponents.

Those trials – the things Perry Mason moments illustrated – we trials by ambush. Much was unknown. Did lawyers during that period of time successfully cross examine witnesses? Certainly, they did. Indeed, many iconic lawyers were amazingly skilled at cross examination in the midst of ambushes.

How is that possible?

The answer is really simple. Effective use of the simple technique takes skill and experience.

The simple answer is an effective cross examination occurs when a lawyer asks questions in a manner and order where a witness either gives the answer the lawyer wants to hear, or, the witness’s testimony is immediately deemed to be a lie by the jury.

How is that possible. The answer is relatively simple. In almost all business cases, and in most catastrophic personal injury cases, there are documents that can, with proper questioning, only mean one thing.

In addition, the facts as developed most often only make sense or hold together if the answer the lawyer seeks is given.

In both instances, if the witnesses gives the “wrong” or “unknown” answer – the answer looks and sounds foolish or made up. Did the lawyer know the answer the witness would give – sometimes – but that really did not matter. The witness under effective cross examination has two choices – give the answer that helps the lawyer’s case or look foolish, or worse, like a liar. Either way, the cross examining lawyer wins.

This example is the most common way effective cross examiners succeed whether or not they know the answer to a question.

Perhaps the most dramatic example in relatively recent court proceedings was the cross examination of Mark Fuhrman in the O. J. Simpson murder trial. F. Lee Bailey, an iconic trial lawyer, only cross examined Fuhrman for a total of 10 minutes. The highlight of the ten minutes was Fuhrman’s emphatic denial that he had ever used the n-word in the last ten years.

I was working on a case in Los Angeles when the radio news described the testimony. I immediately knew a bomb was going to go off in that courtroom at the time the defense team wanted the bomb to go off. Why? A lawyer who asks ten minutes of cross examination of perhaps the most critical police witness in a case and sits down has either destroyed the witness’s credibility or is has absolute and indisputable proof that what the witness said was a lie.

Experienced trial lawyers who heard the description of that testimony could smell blood in the water. The prosecutors knew that the testimony was a problem but they did not know how bad the problem was.

Sure enough, there were hours and hours of recorded interviews of Fuhrman in which he used the n-word over and over. The tapes made it quite clear that not only had he used the word, he was quite comfortable using it.

So what happened when the defense put Fuhrman on the stand in the face of the recordings – he refused to answer questions based upon his Fifth Amendment privilege not to incriminate himself. That was not just a bomb – it was a nuclear explosion.

Moments with that much drama do not happen in every trial. However, with effective cross examination, lawyers ask questions every day that they do not know the answer to that result in testimony that destroys cases every single day.

Explosive testimony really only occurs when an unexpected answer is given. Good trial teams have witnesses prepared to answer questions they know are coming in a way to minimize impact. It is the unknown twist – the skill of an experienced trial lawyer that can create unexpected answers.

If your lawyer does not have that level of skill – you have the wrong lawyer.